The 4th RILEM Spring Convention took place in April 2021, “in” Paris, France. The event was initially planned to be the celebration of the 75th RILEM Anniversary in the same town where the association was founded 75 years ago. This interminable COVID pandemic, however, has forbidden us from travelling and meeting in person this spring so the decision was taken to postpone the celebration to 2022, still IN Paris, hopefully IN person, and to make the 2021 event fully online. This decision has definitively affected the amount of wine and cheese and chocolate consumed over the event this year, and it has also influenced the number of hugs and hand-shakings between RILEM members and friends (unfortunately equal to zero). However, the amount of smiles, laughs, good ideas and project proposals does not seem to have been altered by the online mode.

Within the 4th Spring Convention, the RILEM Strategic workshop definitively holds a special place. On Tuesday 6th April, around 120 people from all over the world joined the opening ceremony whose video is available on the RILEM YouTube Channel. During this session, Mark Alexander, RILEM President in 2012-2015, together with Ravindra Gettu, current RILEM President and Johan Vyncke, current RILEM outgoing President, presented the RILEM History Booklet. This was just a preview of the booklet as it will be officially launched and distributed in September this year, during the 75th RILEM Annual Week. This is the third book published about the history of the association since its foundation: the first one marked the 30th anniversary, the second the 50th anniversary and this one, the 75th anniversary. This booklet highlights the major changes of the association in the last two decades and a special emphasis on the members’ personal reflections and anecdotes. It also presents some interesting conclusions about the importance, in the future of RILEM, of digitalization processes, automation, impact on human health, carbon-neutral construction and circular economy. The latter ones are already hot RILEM topics rooted in the recent initiative GLOBE. 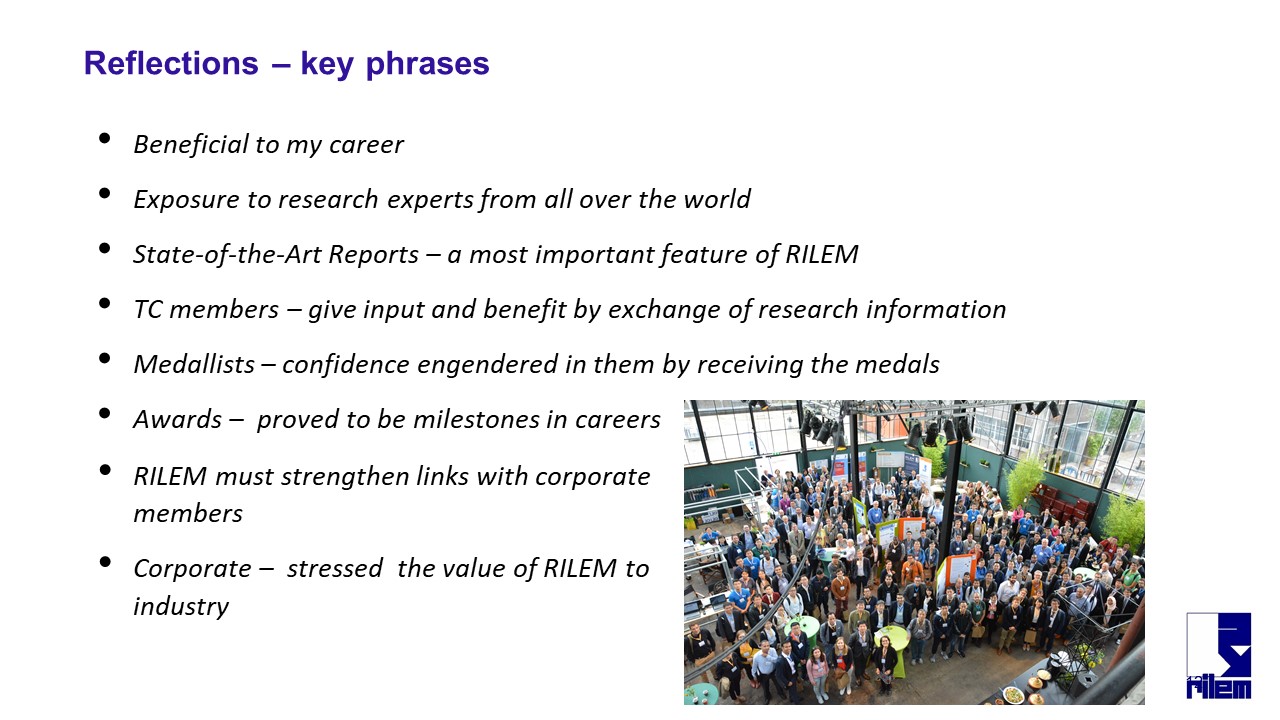 A slide from Prof. Alexander about the key-phrases from the RILEM members included in the 75th RILEM Anniversary Booklet.

Some concluding remarks by Johan Vyncke, RILEM outgoing President, about the paths to follow in the future of RILEM.

A slide from Johan Vyncke’s and Daniela Ciancio’s presentation about the proposed themes for the 2021 RILE Strategic workshop.

The conclusions of each session were presented at the end of the day. The outcomes/proposals of this workshop will be discussed at the RILEM Standing Committees (TAC, EAC and DAC) next September during the 75th RILEM Annual Week where approval will be issued by Bureau and confirmation by the General Council through the votes of the RILEM members.

Wed 7th April was the day of the Standing Committee meetings.

Thursday 8th April was entirely occupied by the Bureau meeting, where many items were presented from the meetings of the day before and approved. 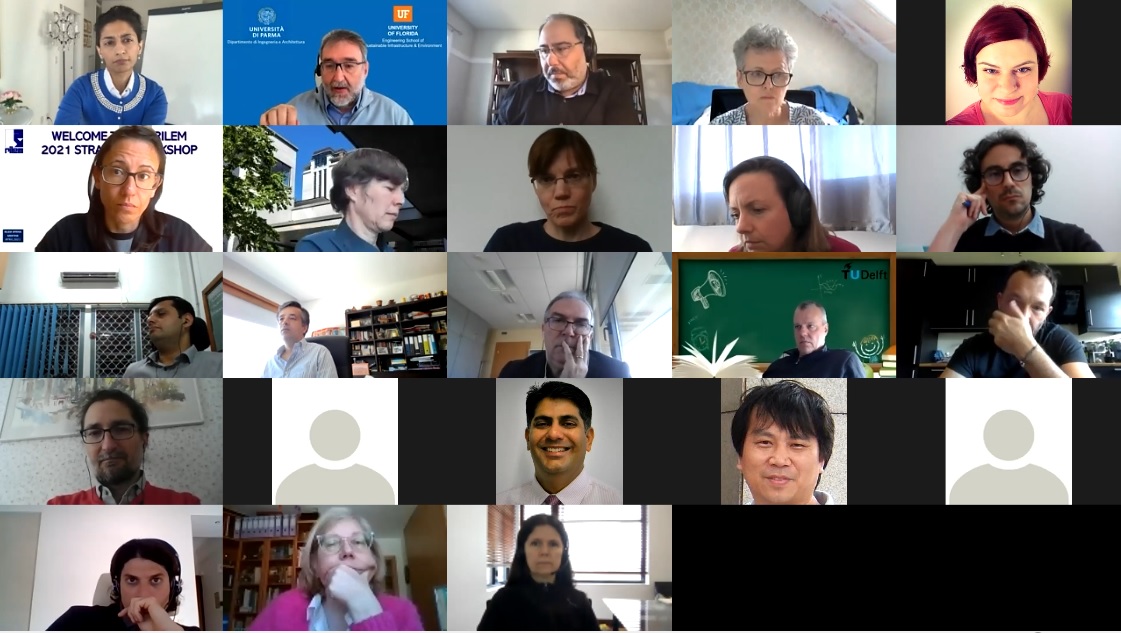 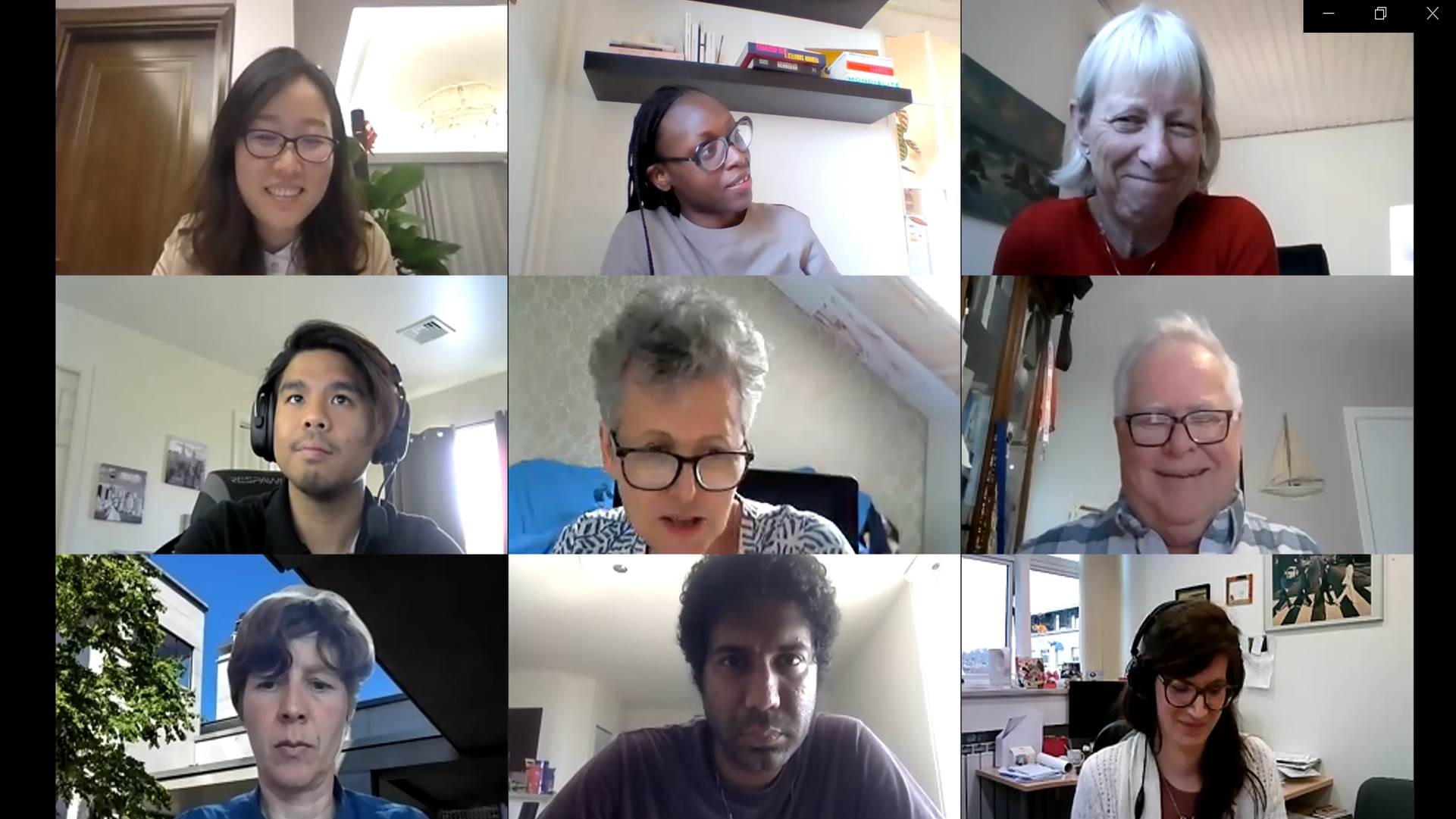 A particular thanks goes to the group of PhD students at the Indian Institute of Technology Madras, India, for the technical help and assistance they provided before and during the workshop. The organisation and execution were flawless, and participants moved smoothly from one session into the other without delays… thanks to their help!

Another note of merit goes to our RILEM members from India, Japan and China for staying connected till the end of all meetings at around 6 pm Paris time (past 10 pm in the above-mentioned countries). Even more impressive was the commitment of our RILEM members from USA and Latin America who woke up very early (or even didn’t go to bed at all) to attend the morning sessions of the event. THANK YOU!!!

Friday 9th of April was the day of the International RILEM Conference on Early age and long-term crack width in RC structures (CRC 2021), organised by the homonymous RILEM Technical committee 287-CCS. This event saw 34 presentations whose papers are included in the conference Proceedings published by Springer and available in June this year. Around 210 registered participants joined the event, 12 of which in person. The organisers are very pleased with the outcomes of the event as there was a good balance between participants from research institutions, industry and standard drafting committees. The highlight of this event was the performance of the conference overwhelming the expectations of the organisers: they anticipated 50-60 participants but they ended up with an audience 4 times bigger!   This marked the relevance of the conference to research and engineering practice needs.