Activity starting in: 2022
Cluster A

As a response to the climate emergency, ambitious targets for climate neutrality have been put forward. Global Cement and Concrete Association’s (GCCA) Roadmap for Net Zero Concrete* has set the target to reach net zero concrete by the year 2050. In the roadmap “savings in cement and binders” accounts for 9% while “carbon capture and utilization/storage (CCU/S)” account for 36% of the total savings. Magnesia-based binders have scope to address both of these subsections. 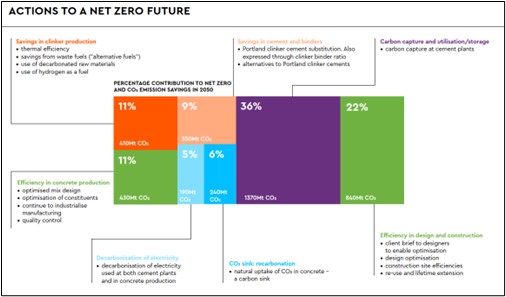 Magnesia-based cements and binders are relatively unstudied systems, but they are gaining more interest since most of the MgO raw materials are not in carbonate forms. MgO is found as magnesium silicates in Earth’s crust, and therefore constitutes a potentially zero-CO2 raw material. The technologies to economically separate MgO from silicates has been viewed as the main stumbling block for MgO-based binders’ scale utilization, however the technologies seem to be developing rapidly, and may reach maturity in following years. Notably there is one piloting project ongoing in Finland utilizing MgO from serpentinites (PILCCU project), and another one in Canada working with olivine (Negative Emission Materials, Inc. USA).[1]

While less mobile than Ca, Mg offers an interesting variety of binder chemistries including silicate-containing magnesium silicate hydrate (MSH), and carbon-binding (hydrated) magnesium carbonates (HMC’s) (see full list below). Since HMC’s contain CO2 in the binders structure, they have the potential to simultaneously save CO2 in the binder (due to zero RM-CO2) while also allowing for simultaneous carbon capture and storage/utilization pathways. The scientific as well as technological viability and scalability of these processes are still open questions to a large degree. The understanding of the potential of these binders potential is still in its infancy and the research is scattered and relatively uncoordinated. Therefore, the objective of this RILEM committee is to take stock of the knowledge created so far, define the major open scientific and technological questions, elucidate the main reaction mechanisms as well as to help bring cohesion and coordination to the field of Mg-based binders.

The work will exclude cement composites, combinations of these binder chemistries, and manufacturing processes.

[1] Note: while MgO is considered as a critical raw material in EU currently, it is due to the over-reliance on imported materials derived from MgCO3 which is expected to be solved when the above-mentioned technology matures.

The TC will deal with the fundamental of the reaction kinetics, formation, and stability of different Mg-bearing phases (such as M-S-H and HMCs) as well as their mechanical and hydric properties. MgO-based binders in this context refer to all relevant inorganic binders based on Mg-bearing phases, which harden and develop strength via different routes including hydration and carbonation.

The TC will be active for 5 years, and the work will imply bibliographical reviews including the transport and mobility of Mg in aqueous environment, the rheology, the reactivity and kinetics of the raw materials but also the stability and durability including thermodynamic databases review and the microstructure. First, the TC will structure its working groups and determine the scope of work and action plan for each working group. During year 1–4, the work is dedicated to literature review, thermodynamic databases survey and potential improvement among participating laboratories. In the final year, the TC will finalize all research data and a survey about the existing thermodynamic databases for relevant MgO-based binders. The dissemination will be in the form of a TC final meeting during a RILEM conference/convention and a series of published review articles.

This TC is expected to gather around 25 RILEM members from different fields of academia. PhD students and young researchers will be targeted as well.

Work packages are as follows:

Objectives: Solubility of Mg+2 is extremely low compared to that of Ca2+ especially in basic aqueous solutions. This hinders its use in cementitious systems and can require pore solution engineering (via e.g. complexing agents) to overcome in some systems. Terminology between scientific disciplines can be a problem. The WP aims to collect understanding in the literature relating to the transport and mobility of Mg in the MgO-based binder and compared with existing experimental work to improve the transport properties of Mg in these binders.

Objectives: The batch variation is often seen in technical MgO and there is little information about the reactivity of Mg(OH)2 extracted from Mg-silicates. Hence, this WP will perform a survey about the reactivity of raw materials used to produce the MgO-based binder. In addition, the reaction kinetics and degree of many MgO-based binders (e.g., M-S-H ad HMC) are low and thus remain a challenging factor. Therefore, the work aims to suggest approaches to improve the reaction kinetics and degree in these binders based on the current understanding of these binders.

Objectives: In MgO-CO2-H2O, all HMCs are metastable with regards to MgCO3 and brucite. Therefore, binders based on HMCs deal with high risks in the long-term durability. MOC and MOS binders are known with their poor water resistance; however, recently there are great advances to improve this shortcoming. Furthermore, there is little systematic understanding about the stability of M-S-H in different chemical environment. Therefore, the main focus in this WP will gain better understanding of the stability of different Mg-bearing phases in these MgO-based binders.

Objectives: Little is known on the microstructure and the porosity of the MgO based materials. Mg-bearing phases such M-S-H are described in literature as nano crystalline round particles while HMC form well-ramified matrix of large crystals, both types offer potential for good binding capacity. High compressive strengths (> 30 MPa) in MgO-based binders are usually explained by their mineralogical arrangement, the morphology of the phases and the microstructure of the matrices. The TC will review the existing experimental work on the characterization of the microstructure as data from e.g. MIP, back scattered SEM to see if the link between microstructure and compressive strength can be fully established.

The TC directly tackles fundamental phenomena in MgO-based binders which will enable further developments for these binders in the future. There was no previous RILEM TC serving in the same purpose. However, the TC will be well in-line with other active TCs such as CCC and MCP. Therefore, the proposed TC is expected to create synergies with other TCs via common laboratories techniques and cement characterization.

The TC aims to

The TC will organise:

Academics, industrialists, and general public. Ph.D. students are welcome to be directly involved.

Specific use of the results

Climate change caused by the anthropogenic greenhouse gas emissions is perceived to be a major threat. The Intergovernmental Panel on Climate Change requires a reduction of emissions by 45% in the next decade. Building sector is responsible for roughly 40% of the global greenhouse gas emissions, of which cement is a major source. Thus, carbon capture and storage/utilization in concrete is a viable option to tackle the emission generated by the clinker process, where MgO-based binders offer a novel route. Potential uses for such binders include: cement substitution, carbonated aggregate production, special purpose concrete, CCU/S, brick production, plaster etc.